Frankton gets fancy thanks to street artists' endeavours 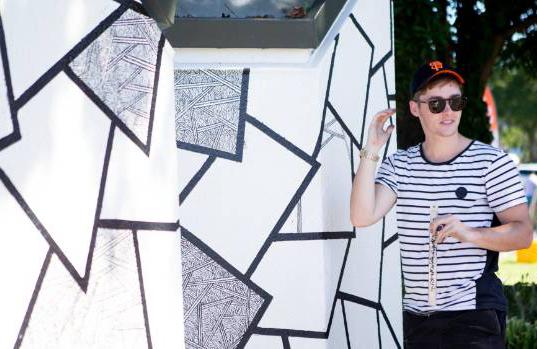 If the Hamilton suburb of Frankton were a person, it would be getting decked out in a brand new wardrobe’s worth of snazzy outfits. That’s the effect of the ongoing Boon Hamilton Street Art Festival, in which mural artists are busy giving numerous walls around the business precinct a colourful, creative makeover – watched by crowds of intrigued sightseers.

It is not just Frankton that’s getting dressed up. A massive wall overlooking the Victoria on the River public open space is being embellished with the image of a giant native falcon, courtesy of internationally-renowned artists Charles and Janine Williams.

Their creativity seems contagious. Below them, in the tiered space overlooking the Waikato River numerous stallholders were setting up stalls to hawk their wares in the monthly Makers’ Market – a new arts and crafts bazaar. Further down the road on Victoria St, the Meteor Theatre and the exterior wall of the old Municipal Pools complex are getting paint jobs courtesy of artists Gina Kiel and Kell Sunshine.

And wherever the artists are adorning their images upon the big, flat surfaces, people are gazing upon them and smiling.

Perhaps the broadest smile belongs to festival co-organiser Charlotte Isaac, who is positively basking in both the sunshine and the success of this year’s festival. “It’s such a cool weekend for Hamilton. There’s so much happening with Boon and the Future City Music Festival and the markets and all the other amazing stuff that’s happening. I’m so stoked that Frankton is getting the love this year.

“The artists are all so lovely. They are so easy to deal with – there’s no divas at all.”

Rachel Peary, a post-graduate arts student at Wintec, was enjoying painting up one of the numerous walls being worked on in Kent St in Frankton. Her work, she explained, was about nothing. “But not in a bad way. It’s nothing in a really good way.”

She was thrilled to be part of “such a really initiative”. “There is such a good vibe this weekend, especially here in Frankton. It is going to be a really good look for this part of the town. A lot of the kids that do graffiti won’t do it where there is street art on the walls. There is a kind of really cool mutual respect there. “It’s great that the organisers have so many women involved this year. There are six female artists and five male, so that is some real gender equality going on.”

Just down the road fellow Wintec arts student Liam Bourton is decking out a toilet block with a striking black and white design. It’s not unlike a fresh pair of funky pyjamas for the Kent St comfort station.

Bourton, whose work also adorns the walls of the Scotts Epicurean cafe in Victoria St, said he and his assistants Marnie White and Matt Williams had been fastidiously working on the outlines for each segment of the artwork which “had taken ages”, but things were beginning to speed up from Saturday afternoon onwards.

“It’s a really awesome day to be down here. People keep coming up to me and talking about what we are doing, which is great. Everybody loves the fact that we are doing what we are doing. And the organisers are amazing. Anything we need they will go and get it for us, and they are making sure we are totally looked after.”

Among those admiring the art in Frankton was Nancy Caiger, the president of the Waikato Property Investors Association and the chairwoman of Mesh Sculpture Hamilton.

“It is fantastic watching all these creatives at work. There are new galleries springing up all over Hamilton as well and all these events are bringing the city to life in the most amazing way.

“A lot of people don’t realise that street artists are extremely accomplished artists in their own right and it is good to be able to see their works as they are being created.”

Sculpture garden to be installed at Ruapehu Community Arts Centre