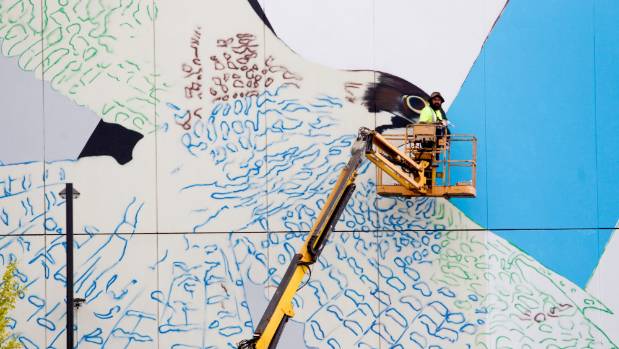 A giant native falcon is spreading its wings above the Waikato River. The kārearea is central to a massive mural taking shape on a wall adjacent to Victoria on the River park as part of the 2018 Boon Hamilton Street Art festival. 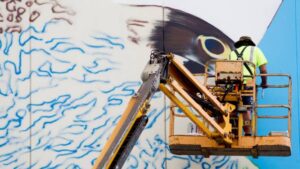 Internationally-renowned painters Charles and Janine Williams will be high above the park painting what will become city’s largest artwork – 39 metres wide and 15m high – until the weekend. What’s taking shape is typical of the pair’s style: realism for a native wildlife subject in the foreground; graphic design and shapes for an urban background. The vibrant colours seen in their other murals will be more stripped back for this design, Charles Williams said.

“We tell stories, local indigenous Māori stories or we talk about conservation.” This mural is based on a local, oral whakataukī (proverb) of a kārearea carrying two brides to the Far North for marriage. Another canvas featuring the falcon and brides has been painted by Williams in Whangārei. 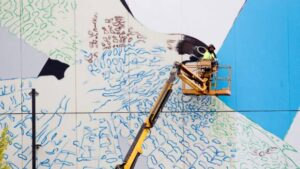 In this mural, the falcon spreads its wings the breadth of the canvas, soaring above a thick blue zig-zag representing the Waikato River. “Once the detail starts coming out and it’s cleaned up, it will be impressive.” Looking up at the huge mural, Williams’ largest so far, and with three days work ahead – he concedes it’s no small task. “It’s bigger when you’re here than when someone emails you and says, ‘do you want to do a mural?'”

They began on Tuesday night, projecting the design on to the wall and tracing the outline. This saves considerable time, Williams said, compared to the alternate method of using a grid system to paint an outline. The trickiest aspects of the work include the detail of the bird’s wings, and a two-metre starting height. A nearby tree, which wasn’t in the initial picture provided for the design, requires the artists to improvise some of the background. 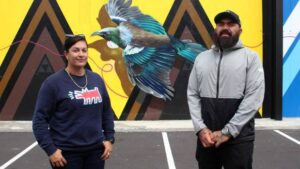 Williams couldn’t estimate the amount of paint used, but the materials cost isn’t small – up to $6000, he estimates. Two rented cherry pickers – another approximate $1000 – are essential to reach the wall. “There’s no other way. Imagine if you just did a roller-pole? You would die.”

Datsuns to roar into Hamilton for Future City Festival