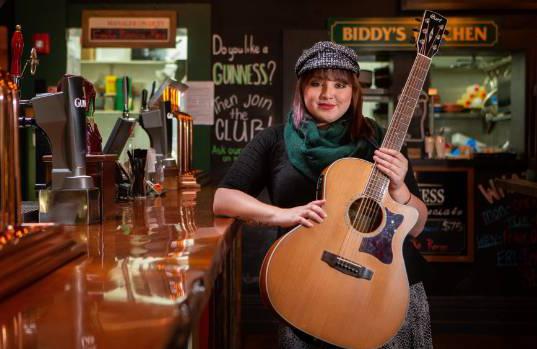 If good luck is the residue of hard work, then fortune is surely set to smile broadly upon Coral Pitcher.

The 24-year-old Hamiltonian singer-songwriter would likely be one of the Waikato’s most diligent, dedicated performers, putting equal effort into career planning and relentless gigging, as she does into the creation of her music.

And now – following a tour around the North Island in June – her efforts have been rewarded with the surprise offer of inclusion in the New Zealand contingent competing in the World Championships of Performing Arts, being held in Hollywood, California next month. “Singing and playing music is what I want to do. It’s what I will always be doing.”

Pitcher’s potential first came to light a decade ago when, as a 14-year-old student at Fraser High School, she appeared as a contestant on the first series of New Zealand’s Got Talent, making it all the way to the semi-finals.

Since then the Morrinsville-born artist has worked hard on her career, which culminated with the release her debut album My Addictive DNA in August last year.

Pitcher’s story, however, appears far from over. “A lot of people have responded to me, telling me how brave I was for speaking out and telling me about their own situations, saying ‘Hey, I’m glad I’m not alone’.”

Shortly before her album was released she performed in a free-to-air concert at Hamilton radio station Free FM. A talent scout for the championships happened upon it, and wrote to her to see if she would be willing to take part.

“I put a lot of stuff out there and I always hope it is going to get a bite … It feels like it is the right thing to be happening at this time.”

Pitcher is putting all the money she makes from her gigging towards the forthcoming trip to LA. “It turns out that heartbreak inspires a lot of songs.”

“I’m crossing my fingers nothing happens before then. At any moment my car might stop working.

“I’m performing three to four nights a week. There’s lots of hustling and the word spreads if people know that you deliver.”

But just because she is working hard, it does not mean that Pitcher’s creativity dries up as a result. Recently parting ways with her long-term boyfriend has provided an unexpected impetus.

“It turns out that heartbreak inspires a lot of songs.”

There has also been a struggle resisting her “triggers” and resorting to counter productive, if not self-destructive behaviour.

“I come from an entertainment family and I have been going to pubs and shows since I was a little girl. It’s a world where there is a lot of smoking and drinking and late nights. It is a struggle not to become a part of that too much and staying focussed on what’s important.”

Writing about her challenges on Facebook proved to be a liberating experience, as well as a unifying one.

“A lot of people have responded to me, telling me how brave I was for speaking out and telling me about their own situations, saying ‘Hey, I’m glad I’m not alone’.”

Pitcher now has the support of a personal trainer as well as her parents. She is now living with her father and has the support of her mother/manager/co-songwriter Emmeline Pitcher, who is accompanying her on her Hollywood adventure.

“There are 20 performers from New Zealand who are going – magicians, artists, singers, dancers – and with support people that makes about 44 of us. I don’t know how many are taking part overall, but there are people from 55 countries participating.”

The championships involve an initial boot camp with entertainment industry professionals, who end up assessing and judging the young performers in concert.

“I’m hoping I can come back with a record deal … It’s having ultimate faith in that I want to do something bigger and I will end up doing something bigger. I have been doing this for 10 years now, and it is time I branched out.

“I have probably got enough music up my sleeve for a six-album record deal … Singing and playing music is what I want to do. It’s what I will always be doing.

“At any moment the car might stop, but I’m pinning all my hopes on getting a good break soon. I know there will be lots of industry professionals in LA checking out all the performers. I am open to whatever happens. Open to the universe.”

Pitcher’s aptly-named Go For Gold tour begins at 8pm on Thursday night at Biddy Mulligans. Her following performance dates are: