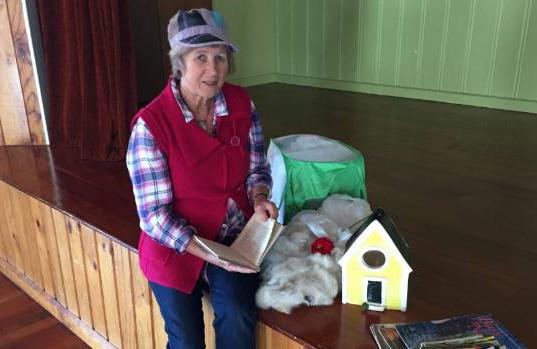 Gail Drake will bring her interests in creativity and the Bruntwood Pukeroro Hautapu Hall together to put on the Evergreen Expo.

It frequently puts on events in Waikato Museum, but the heart of the Waiclay team hails from Cambridge. The incorporated society is now working on a project that will be taking place closer to home. Waiclay was formed in 2000 by a group of Waikato potters who wanted to establish a conference to bring ceramic artists together from around the country.

Janet Smith, Barbara McNicoll and Gail Drake are the three Cambridge women who were part of the original convention group who helped the biennial Waiclay National Ceramic Conference come together.

“I was home hosting here in Cambridge when the conference came up, and we decided we were having it at St Peter’s,” Drake said.

“The committee decided that they needed someone to look after the accommodation side of things for them, and so Sandra Webb who I was good friends with at Heritage Gallery, she nominated my name.

“That was the beginning of the whole thing for me really, because I came into the Waiclay team to help them with arranging accommodation.”

As a committee, Waiclay decided they wanted to continue to promote ceramics in Hamilton and Cambridge. The group formed a partnership with Waikato Museum, where the Waiclay team has since held many events and exhibitions.

“I wanted to be more active in the Cambridge area as well, and I could see we could bring the ceramics to Cambridge,” Drake said.

The team’s present project has received funding from Creative Communities Waipa. Drake has been involved in holding events in Cambridge for 20 years, and working behind the scenes for the Bruntwood Pukeroro Hautapu Hall for 30 years, so she wanted to bring those interests together.

Evergreen Expo will be taking place in the hall over April 27, 28 and 29, accommodating fresh, interesting and enduring creativity. The aim is to give a range of people, groups and artists the ability to take part, and feel included in the community. Stalls will be available for artists and it will include a traditional Japanese tea ceremony using a unique ceramic tea bowl made by a Japanese artist.

“The support we’ve had in Cambridge is phenomenal,” Drake said.

“We’ve always had strong support from the creative communities.”