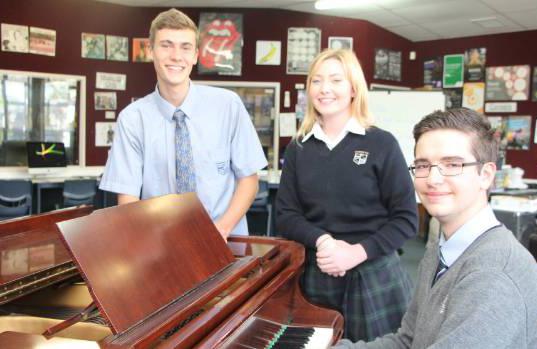 With an appreciation of music as wide as Tchaikovsky to Taylor Swift, Three Cambridge High School students have hit the right chords this year. Composer James Ter-Morshuizen, country singer Molly Goodeve and classical pianist Christof Venter have achieved in their genres and are pupils of Cambridge High School.

James describes his song as the heartbreaker for Shakespeare’s 16th century play Much Ado About Nothing. “He said he wrote the song last year using quotes from verses in the show and put it to the music he composed. “I re-recorded the song and entered it into the competition.”

As a part of his prize, James has the opportunity to be involved in a week-long workshop at the University of Otago. From this course, 20 students will be selected to go to London to perform their works. His musical interest started early learning to play guitar, piano and drums but is unsure if his future is in music.

Fifteen-year-old country singer Molly Goodeve’s career is shining brightly after being named the overall winner in the intermediate section at the New Zealand Gold Guitar Awards. She picked up the category winners trophies for vocal soloist, instrumental, and traditional and along with Hamilton singer Hayley Monaghan as the winner in the duet section.

Now she’s looking to record an acoustic single which will be produced in Nashville. Her next major appearance will be the 2019 Tamworth Country Music Festival in Australia.

Classical pianist Christof​ Venter, 18, hasn’t won the top prize yet but is just weeks away from playing as a finalist in the prestigious 2018 Wallace National Junior Piano Competition in Auckland. His inclusion as a finalist puts him into the category of the top 16 classical pianists in the country.

As part of the judging criteria, he will be required to play a total of 50 minutes comprising of four compositions in front of an audience. Christof’s love of the classics started at an early age and continued into his teens. “My Spotify playlist is slightly different to other teenagers,” he said.