Value of vinyl in the eye of the beholder 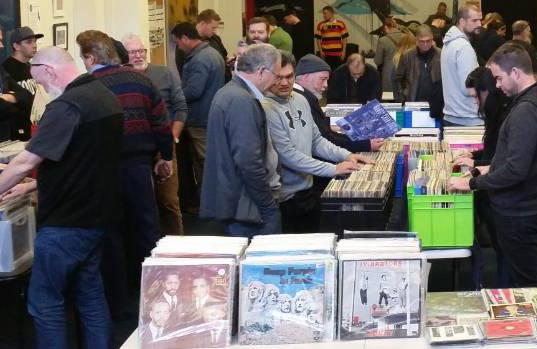 There’s two Princes on offer. A world of distance and musical careers separate them and they’ve both been dead for some time now.  But beneath their plastic sleeves and separated only by their respective seller’s tables, both Prince and Prince Tui Teka look in pretty good nick.

Two pristine discs of vinyl – one the genre-bending outpourings of an enigmatic artist from Minnesota, the other offering the richly-voiced Kiwi showband crooner – amid the thousands of records stacked carefully in plastic bins in a central Hamilton building.

Prince has come over from Tauranga for the day, while a Hamilton dealer has brought the former Maori Volcanics’ offering. Who takes them home from the Hamilton Record Fair is anyone’s guess. 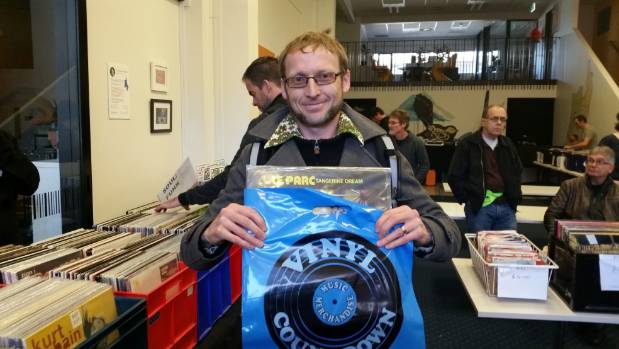 Foreign pressings of vintage rock classics and hip hop sit next to funk which sit next to punk, which may sit next to junk – it’s all a matter of taste. Hundreds of savvy seekers peruse the crates looking for hidden vinyl treasures and only a fool presumes to know which selection would ring true for a hunter.

Dean Ballinger laughs when asked what he’s bought. “It’s Tangerine Dream,” he says. “Krautrock it’s called. German sort of experimental music if you like. This is 1980s, mid 80s. I think it’s an early sort of synth music.”

“I’m not some vinyl purist,” he asserts. The words hardly leave Ballinger’s mouth before the former student band member turned academic offers an addendum. “But sorry, I do like it better than spotify and digital stuff online.” 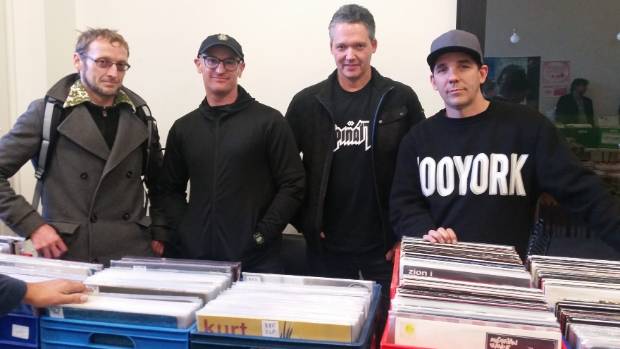 For Ballinger vinyl is about the sound quality and the culture of it. It’s about really listening. “Putting the effort in to actually play something makes you really focus on it and usually appreciate it a lot more.”

In the 1990s as CDs dominated the market casual music collectors were flogging their vinyls for a song so he grabbed piles of the stuff. “I do miss the second-hand record shops that used to be around back in the ’90s. I used to just go in and potter around.” One stall he potters at in the Hamilton Record Fair’s June edition at Creative Waikato belongs to a guy who never left the vinyl party – he even sells the T-shirts. 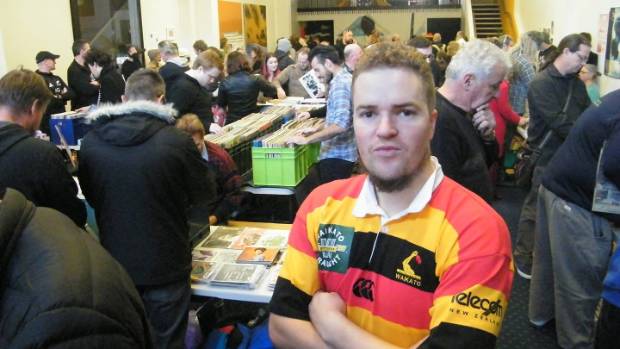 It’s Ballinger’s former Te Awamutu College mate Mark Thomas. Mark is the owner of New Plymouth’s Vinyl Countdown and the strength of his devotion is pretty clear. He has been a part of the New Zealand record industry since 1993 and makes no apology for his favouritism of vinyl over digital media. “The sound of vinyl is superior to CDs, to streaming and downloading,” Thomas enthuses.

In the ’90s and 2000s he saw record sales decline but things have changed. “In the last five years it’s increased a lot with young kids finding the joy in collecting something, and if they were going to collect something it was going to be records they wanted, not CDs.” Thomas has collected ELO (Electric Light Orchestra) albums and those of its co-founder Jeff Lynne since he was a teen and is always on the hunt for more.

“I think everyone’s got a specific artist or genre that they’re looking for even though they’ve got hundreds of them already. It’s almost like an obsessive, hoarder-type thing.” 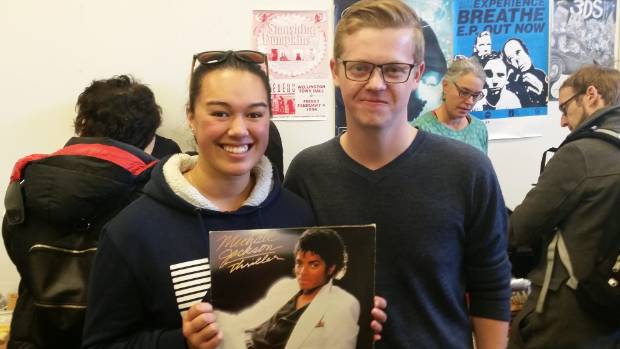 Three simple reasons compel the record fair’s founder Dujon Cullingford out of the house on a crisp winter Saturday – he’s passionate about his city, he’s into records and he’s a mindful husband. “I wanted to sell some records and make my wife happy by creating some space”.

The DJ, dancer and Hamilton City Council employee, has always been obsessed with music and began his “seizable” but “not ridiculous” collection only a few years ago. He is loyal to an era. “I listen to heaps of ’70s funk music and New Zealand’s 70s funk is even better. There’s not much of it but what there is, is really cool.”

His favourite home-grown band from the genre is Collision. The group from Tokoroa rose to fame in Wellington and cut their only album in Sydney. They opened for funk and soul legends like Isaac Hayes, Tina Turner and Osibisa.

Cullingford relays the tale of how Earth, Wind and Fire’s horn section, The Phoenix Horns, showed up at a Collision gig, jumped on stage and “played the night away with them.” Collision’s self-titled album holds a special place in his collection and his pantheon of Kiwi musical gods. “It’s cool to hear that a couple of Māori boys from the bush cracked it on that international scale. That record for me is pretty important.” 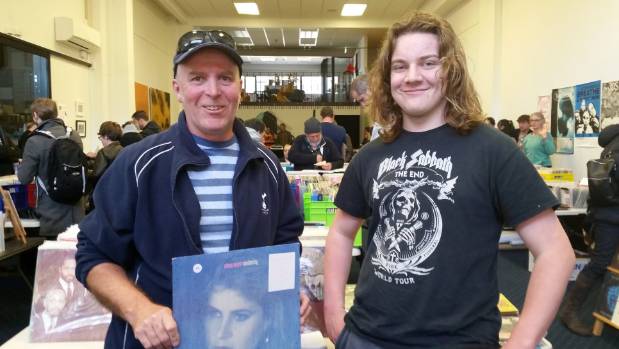 Brad Miller and Bailee Simpson walk the aisles with a bag of about 20 albums. The 19-year-olds grew up in a world of CDs and cassettes but prefer the rotating black disc. “I’m a huge fan of records, of vinyl. I couldn’t miss it when I saw the signs all around town.” Brad says. “It’s a cool way to spend a Saturday, sifting through old records,” his Bailee adds.

Miller grew up rocking to his dad’s AC/DC and Def Leppard while Simpson grooved to her grandparents’ Stevie Wonder and Temptations sounds.  Miller has been jamming his Pink Floyd  Dark Side of the Moon album lately and, as the couple put it, “we’re into a lot of old music, very old music.” Records are more intimate, says Miller.

“It’s the experience, not just listening to the songs, you can get that anywhere. (With vinyl) you’ve got the whole process of sifting through the pile, getting the record out,  hearing the needle go on, hearing it crackle when it starts. It’s just ahhh.”

Miller’s made two stand-out purchases.  The Works of John Barry, composer of 11 James Bond films, couldn’t be left on the table by such a big fan of the films.  He’d also snuck in a surprise for Simpson. “You bought Thriller?” she asks. “Just for you,” he says, as Michael Jackson stares from cover of his 1982 classic. The couple aren’t the only youthful record fans in the room. 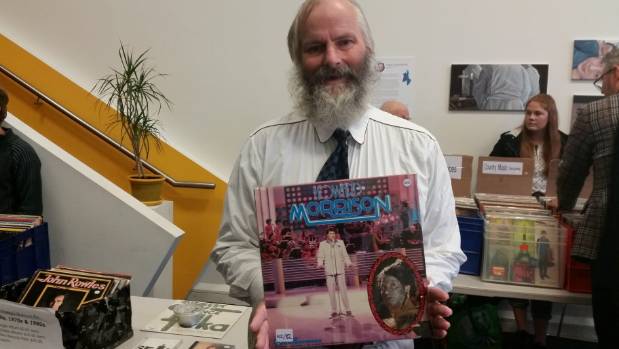 Seventeen-year-old Aaron Hughes is browsing with his Father, Ian. Originally from England, the Hughes now live in Cambridge.  They keep an eye out for fairs and today Ian’s just looking for old records. He hasn’t got a big collection, but he’s got a “nice collection” and one favourite that gets played a lot is Dire Straits Live.

The pair agree that vinyl’s sound is much cleaner. Aaron holds an album and waits on his father’s yay-or-nay nod. At a price of $18, Dad says, “yeah probably.” The teen plays guitar and keyboard and says his favourite album is George Harrison’s All Things Must Pass.

At age 14, Aaron was into modern pop like Katy Perry then moved to more progressive artists like Yes and Genesis. Aaron says it all began, in the car, listening to his Dad’s copy of The Doors’ self-titled debut album.  “The very first little drum beat of Break on Through. That’s what changed me.”

It’s closing time and Mark Thomas thinking about cashing up. He’s not sure of the numbers yet but he’s got a smile. “I was certainly worth the trip, I’ll put it that way.”

​Hamiltonian Phillip Longley scours op shops for sought-after titles thinks it’s been a good day. “I’ve made some money. I find records to be a great investment.” But it’s not just about the cash. “I’m loving it here. The people are great and everyone’s happy.”

Cullingford rates the fair a success based on the number of people through and deals done. “If they [vendors] make good sales, feel connected to the event and have good yarns with the locals it’s usually a win. And most of them did.” He’s off home to put on a record.