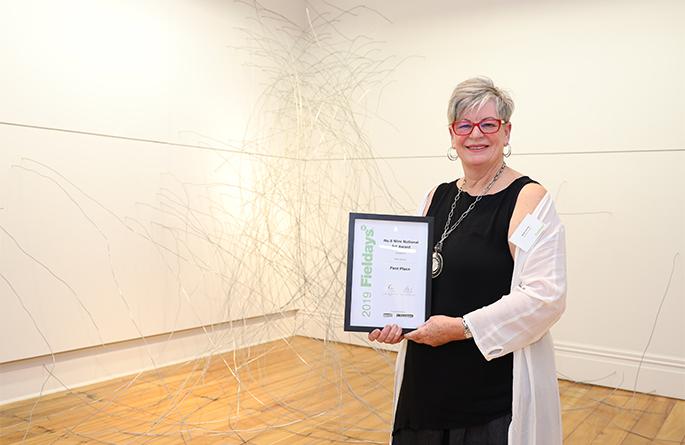 Hamilton artist Gaye Jurisich has taken out top honours in the 2019 Fieldays No.8 Wire National Art Award with her captivating piece labelled Snare.

The Fieldays No.8 Wire National Art Awards are hosted and coordinated by Waikato museum, partnered by Farmlands cooperative and supported by the New Zealand National Fieldays Society.

“Often with sculpture, people think that it’s fine to have something wall mounted,” says Linda. “The whole attraction of that piece was the fact that it was sprouting out of the walls and using the floors as well, so it was a real installation.

“Gaye’s sculpture really captured the energy of the material well. No8 wire is really strong stuff, and when it’s coiled it’s got all that springing energy. It really did express the quality and energy that’s inherent in No8 wire.” 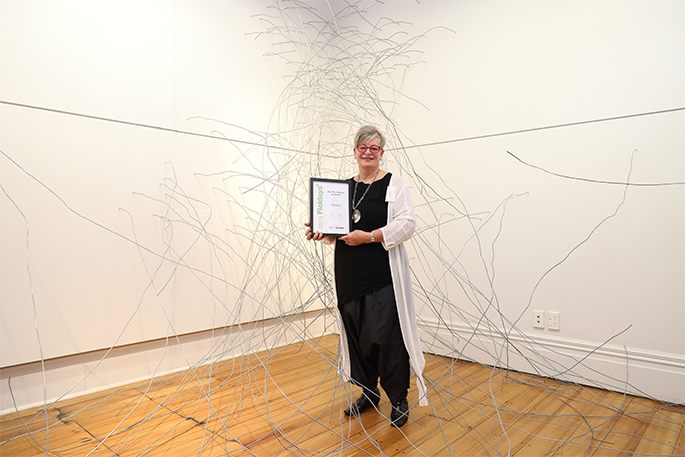 Snare was one of 25 artworks created by 23 artists on display at ArtsPost Galleries & Shop in a fine display of creations showcasing the value, versatility and symbolism of No.8 wire through the creation of artworks made from this icon of Kiwi agriculture.

New Zealand National Fieldays Society President Peter Carr awarded his President’s Choice to Dagmar Elliot of Te Awamutu’s for her piece The No.8 Pātaka. The Pātaka, or Maori house, struck a chord with Carr who appreciated it’s connection with food.

“This piece really symbolised food, farming and Fieldays. The fact that the roof of the little house was made from rusty looking No.8 Wire paid great homage to the material’s durability showing that it will last forever,” says Peter. 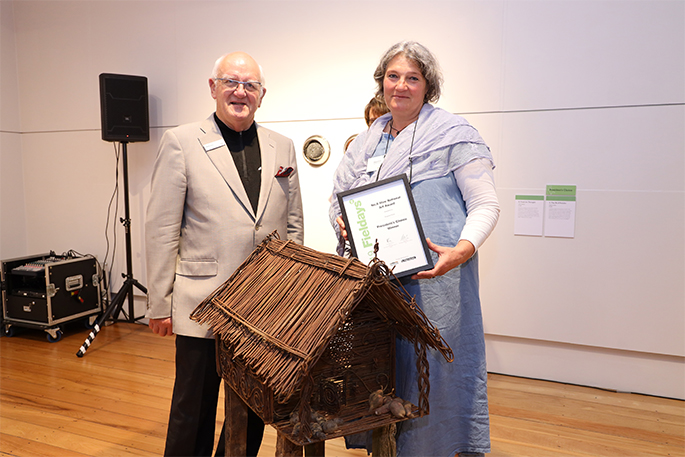 Jasmine Clark’s Kupenga received third place from Tyler who was very impressed with the skill involved in weaving the wire making it seem as if it were a delicate natural fibre rather than a strong metal. The reference to the ingenuity of traditional fishing methods within the Maori culture gave it great background.

This year’s judge, Associate Professor Linda Tyler has taught art history at Canterbury, Victoria, Waikato and Auckland universities, and at Unitec and Otago Polytechnic. Ms Tyler has also been an art curator at Waikato Museum, the Hocken Library and Gus Fisher Gallery and is now convenor of Museums and Cultural Heritage at the University of Auckland.

Linda spoke of her appreciation for the work the finalists have put into their pieces, “I’m in awe of how people can manipulate it and do things with it that are against it’s nature, it’s really hard stuff to move around. There’s a reason it’s ubiquitous in fencing and that’s because it is so tough!”

“I think one of the nice things about bringing No.8 wire indoors and working with it sculpturally is that it becomes like drawing in space because the wire itself is a perfect line. When you shape the wire, you can capture light and cast shadow and do all sorts of extraordinary things with it once it’s indoors when you can exploit the intention of it as something to draw with.

Fieldays is based on a 114-hectare site at Mystery Creek 10 minutes from Hamilton and is the largest agricultural event in the Southern Hemisphere.

Fieldays draws people from around the globe – both as exhibitors and visitors. In 2018 Fieldays celebrated its 50th event and saw 130,866 people visit the event, generating $492M in sales revenue for New Zealand businesses.

Fieldays is run by New Zealand National Fieldays Society, a charitable organisation founded in 1968 for the purpose of advancing primary industry.

The No.8 Wire National Art Award exhibition will run at the ArtisPost Galleries & Shop from May 11 through to June 9

Artist proposes to use sculpture to create 'an icon' for Whitianga